CONVOLVULACEAE - the Morning glories and bindweeds

A family of climbers, herbs, shrubs and occasionally trees, with usually regular flowers with a sympetalous corolla with five conspicuous mid-petaline bands

Distribution: Widespread in tropical and temperate regions. In temperate and drier tropical places they are often low-growing herbs or shrubs in grassy or rocky places, sometimes on sand dunes (Calystegia and Ipomoea species) or salt-marshes (Cressa, Wilsonia) or in semi-deserts (especially Convolvulus), or are climbers over other vegetation. Ipomoea aquatica grows in still water. In the wetter tropical areas they are often herbaceous climbers in thickets or at forest margins, or often high-climbing woody lianes reaching the forest canopy at 35 m or more.

Description Annual to perennial herbs to shrubs or often herbaceous or woody climbers up to 35 m or more, or occasionally free-standing trees (Humbertia, some Erycibe and New World Ipomoea species), or leafless parasites (Cuscuta). The climbers twine to the right and have no tendrils or other climbing aids. The leaves are alternate, usually with a cordate base in the herbaceous climbers but often coriaceous and cuneate in the woody lianes, usually simple but occasionally compound with palmate or pinnate segments (Ipomoea and Merremia species), the margins entire or weakly to deeply lobed (spinulose in Hyaloscystis), or leaves are absent (Cuscuta). The inflorescence is usually an axillary cyme and may be capitate (some Jacquemontia, Convolvulus etc) or reduced to a single axillary flower (e.g most Calystegia), but is sometimes racemose, or a terminal thyrse (Humbertia). The bracts may sometimes be strongly accrescent in fruit (e.g. Neuropeltis, where they are adnate to the pedicel). The pedicels bear two bracteoles which may be large and enclosing the sepals (Hewittia, some Calystegia) or may be scarcely visible (Neuropeltis). The flowers are actinomorphic except in Humbertia (see first tribe below) and Ipomoea lobata, bisexual or in Cladostigma and Hildebrandtia functionally unisexual (dioecious in Hildebrandtia), and 5-merous except in some 4-merous Cladostigma and Hildebrandtia species. The sepals are usually free and overlapping in a quincuncial arrangement, sometimes unequal or accrescent. The corolla is campanulate to funnel- or salver-shaped and 0.2–9.5 cm long, or (Lepistemon, Ipomoea lobata) urceloate, or in some moth pollinated Ipomoea species the tube is narrowly cylindrical and up to 16 cm long. It is always characterised by conspicuous mid-petaline bands (see below). The stamens are attached to, and usually included in, the corolla, but occasionally strongly exserted (Humbertia, some small-flowered genera). Pollen is variable, and provides important tribal characters. The ovary is superior, bicarpellate or rarely of 3–5 carpels, with a simple or forked terminal style or two distinct styles, or in Falkia, Dichondra and Remirema the ovary is deeply 2–4-lobed with a gynobasic style. The stigma is variously divided or swollen. The ovary has 1–4 locules, and usually 4 basally attached ovules, but Humbertia has many ovules (only 1, 2 or 4 developing). The fruit is typically a dehiscent 4-seeded capsule, but may be a 1-seeded utricle or a fleshy or mealy berry (Argyreia) or become woody and nut-like, or may break up irregularly. The seeds typically have two flat faces and a rounded back, and may bear various types of hairs.
When the flower is in bud, a band occupying the longitudinal middle third to fifth of each of the five segments of the corolla (tapering to a point at the apex) is exposed to the exterior while the rest of the corolla is folded into the middle of the flower. These bands are clearly seen in the opened flower and are generally known as the mid-petaline bands. They usually differ markedly from the other areas of the corolla in colour, texture or indumentum, and may include a clearly visible vein. They are characteristic of the family, and may provide characters of generic significance (pubescent in Convolvulus and glabrous in Calystegia for example).

Classification The family is allied to other families which have alternate leaves and actinomorphic sympetalous flowers, and is placed in the Solanales of APG II. Traditional subdivision of the family1 has been based largely on characters of the ovary, number of styles, shape of stigmas, pollen characters and dehiscence of the fruit, as well as the obvious differences in habit and leaf form. Recent molecular analysis has largely reflected this except in some details, and 12 tribes are here recognised:

HUMBERTIEAE, monotypic, from Madagascar. A tree to 35 m, with leathery, oblanceolate-cuneate leaves. The inflorescence is a terminal thyrse. The flowers are weakly zygomorphic, the stamen filaments arching upwards to lie under the upper side of the corolla, which is slightly longer than the lower side, while the upper part of the filaments is long-exserted and deflexed. The ovary has c. 20 ovules per locule but only 1–2(–4) seeds per capsule. Humbertia (1 species).

ERYCIBEAE, 1 genus and c. 75 species, tropical Asia to Queensland. Woody climbers or perhaps sometimes small erect trees, often with stellate hairs. The leaves are often leathery and large (to 40 cm), usually more or less elliptic to obovate, not cordate at the base. Each of the five segments of the corolla bears two large lobes apically. A style is absent, and the sessile stigma is conical to concave. The fruit is a slightly fleshy indehiscent 1-seeded berry. Erycibe (c. 75).

CARDIOCHLAMYEAE, 6 genera and 21 species, Madagascar, tropical Asia and C. Australia. Herbaceous to woody climbers to 25 m or more. The leaves are cordate at the base, except in Duperreya where they are linear, and venation tends to be palmate. The bracts are foliaceous, and the sepals are accrescent. There is a single style, and the stigmas are capitate to weakly lobed. The fruit is an indehiscent 1-seeded utricle. Cardiochlamys (2 species), Cordisepalum (2), Dinetus (8), Duperreya (2), Poranopsis (3), Tridynamia (4).

PORANEAE, 4 (or 7) genera and 32 (or 53) species, pantropical. Woody climbers to 20 m or more. The leaves are more or less ovate to elliptic with pinnate venation, not cordate at the base. Flowers are rather small, 4–20 mm. The calyx is typically strongly accrescent. There are two free or partially fused styles, with globose stigmas. The fruits are indehiscent 1-seeded utricles. Calycobolus (28 species), Dipteropeltis (1), Porana (2), Rapona (1). Of these genera, Porana is placed by the molecular data closer to the Dichondreae, to which it shows little morphological similarity. Metaporana (7) is placed as sister to Porana but has close morphological similarities to the Cresseae. In addition, Neuropeltis (13) and Neuropeltopsis (1) are placed by the molecular data sister to Calycobolus, Dipteropeltis and Rapona, and resemble them in adaptation to wind for seed dispersal, but their accrescent parts are bracts rather than the calyx.

MARIPEAE, 3 (or 4) genera and 36 (or 37) species, tropical America. Woody climbers to 30 m or more. The leaves are mostly leathery and more or less elliptic or ovate, sometimes large (to 25 cm), not cordate, tending to pinnate venation. The calyx is not accrescent. The styles are 1 and entire or 2 and free. The fruit is indehiscent, woody and nut-like. Dicranostyles (15), Lysiostyles (1), Maripa (20). In addition, Itzaea (1) fits closely with Maripeae in morphological characters but is placed by molecular data near to Calycobolus of the Poraneae.

DICHONDREAE, 4 genera of which one is widespread, one is from Yemen to S. Africa, one is confined to Ethiopia, and one in Mexico, with 20 species. More or less prostrate creeping herbs with small flowers (2–13 mm). The leaves are reniform to linear. The ovary is either 2–4-lobed to the base with 2 gynobasic styles and developing into a 2–4-lobed fruit with a single seed in each lobe, or is entire with 2 terminal styles developing into a 1-seeded utricle or a 2-locular, 4-seeded capsule. Dichondra (15), Falkia (3), Nephrophyllum (1) Petrogenia (1).

CRESSEAE, 8 genera with 215 species, widespread. Erect or prostrate herbs to shrubs or climbers. The leaves are linear to elliptic or obovate, not cordate at the base. Flowers are 4-merous in Hildebrandtia and Cladostigma. The sepals are not or rarely accrescent. There are two styles free or partly fused below, with stigmas digitately lobed, filiform or capitate. The fruit is a dehiscent capsule with 1–4 seeds. Bonamia (56), Cladostigma (3), Cressa (4), Evolvulus (100), Hildebrandtia (11), Seddera (31), Stylisma (6), Wilsonia (4).

CUSCUTEAE, 1 genus with 200+ species, widespread. Twining parasites lacking chlorophyll and with leaves reduced to scales or absent, attaching themselves to their hosts by haustoria. Cuscuta.

ANISEIEAE, 4 genera with 7 species, tropical America. Herbaceous or slightly woody climbers up to 5 m. The leaves are elliptic to heart-shaped, cuneate to cordate at the base. The inflorescence is cymose and often capitate, or flowers are solitary, or in Tetralocularia a one-sided raceme. The sepals are often unequal and accrescent. The style is single with an elongate or globose stigma. Aniseia (3), Iseia (1), Odonellia (2) and Tetralocularia (1). The last of these is basal to the other genera in molecular position and differs markedly in its inflorescence and 4-lobed fruit, and may be better referred to a different tribe.

CONVOLVULEAE, 4 genera and 375 species, temperate and tropical regions. Annual or perennial herbs to shrubs or herbaceous or woody climbers. The leaves are cordate at the base or not. The inflorescence is cymose, sometimes capitate or paniculate or reduced to solitary axillary flowers. Sepals are equal or not. There is a single style, bearing a stigma with 2–4 linear, tongue-shaped or clavate lobes. The fruit is a capsule with 4–8 valves or breaking up irregularly. Calystegia (26), Convolvulus (221), Jacquemontia (120), Polymeria (8). Jacquemontia is placed somewhat removed from the other genera in the molecular analysis, but is so close to Convolvulus morphologically that it is difficult to define clearly.

MERREMIEAE, 7 genera with 120 or more species, pantropical. Herbaceous or woody climbers to 25 m or more, or rarely perennial herbs. The leaves are simple or compound, more or less cordate at the base. The inflorescence is cymose. The sepals are often accrescent, and the anthers often twist on dehiscence. There is a single style with a stigma with two globose lobes. The fruit is a 4-valved capsule or breaks up irregularly. Davenportia (1 sp.), Decalobanthus (1), Hewittia (2), Hyalocystis (2), Merremia (100+), Operculina (12), Remirema (1), Xenostegia (2).

IPOMOEEAE, 9 genera and c. 755 species, pantropical. Herbaceous to woody climbers to 30 m or more, or sometimes shrubs or trees or perennial or rarely annual herbs. The leaves are simple or occasionally pinnately or palmately compound, usually cordate at the base. The inflorescence is cymose, and the sepals usually not accrescent. The pollen is characteristically spinulose and pantoporate. The ovary is 2 or 4-celled or rarely (Ipomoea sect. Pharbitis) 3-celled. The fruit is a capsule with 4(6) valves, or indehiscent, or woody or leathery with a slightly fleshy mesocarp. Argyreia (100+), Astripomoea (12), Blinkworthia (2), Ipomoea (c. 600), Lepistemon (6), Lepistemonopsis (1), Paralepistemon (2), Rivea (3), Stictocardia (14), Turbina (16). 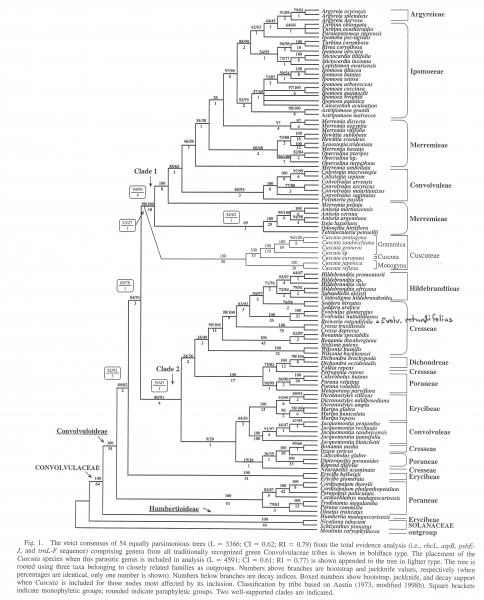 Economic uses: Root tubers of Ipomoea batatas (sweet potato) are extensively eaten and are used as a source of industrial alcohol and sugar or as livestock feed. Leaves of I. aquatica (water spinach) are eaten as a potherb (kang-kong, ong choi) in the tropics. Minor medicinal products, mostly purgatives, are obtained from the roots of a few species of Ipomoea (especially I. purga, jalap), Convolvulus (C. scammonia, scammony) and Operculina, and others produce ergoline alkaloids in their seeds and have been used in religious rituals. Species of Ipomoea, Convolvulus, Evolvulus, Poranopsis and Turbina are grown as ornamentals and Argyreia and Merremia also provide capsules and accrescent calyces used in dried flower arrangements. Dichondra species are sometimes used as a lawn substitute. Cuscuta (dodder) may be a serious parasite of crop plants, while Convolvulus arvensis and Calystegia species (bindweeds) may also be persistent aggressive weeds of gardens and agricultural land.