Classifications in most angiosperm families are often numerous and in constant evolution and research. Austin (1973) recognised nine tribes and around fifty genera. More than 1500 species are usually recognised. 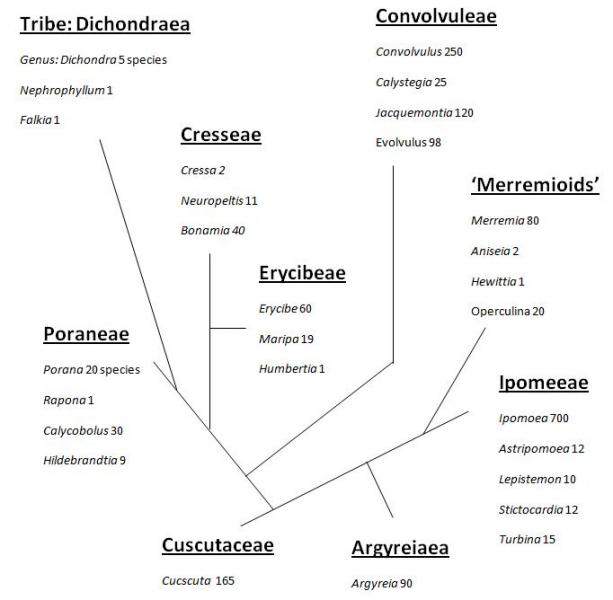 Caption: Tribes and genera in the family Convolvulaceae (Austin 1973).

Inflorescence: Flowers are often solitary but they can also be grouped in cymes or dense heads (capitula). The inflorescences are usually axillary (in the axil of the leaves); sometimes they are terminal (Maripa).

Bracts: They are generally undeveloped but can form an involucre (Ipomoea santillanii, Calystegia). They can also be fused and boat-shaped (navicular), hiding a dense capitulum from which flowers emerge (Ipomoea involucrata, I. pes-tigridis).

Peduncles: Flowers are mostly stalked (pedunculate), but sessile in Evolvulus cardiophyllus. The peduncles can be accrescent and coiled in fruit (Ipomoea wrightii). They can become club-shaped (clavate), thick and succulent in Ipomoea sect. Calonyction.

Calyx: The sepals constitute an important morphological character to distinguish between species and even some genera. The calyx has five free and more or less equal sepals, in Aniseia the two outer sepals are much larger than the three inner ones. The sepals can be accrescent in fruit like in Calycobolus and Hildebrandtia.

Corolla: The flowers are pentamerous (having parts in 5s), actinomorphic (except in Ipomoea lobata), and bisexual (except in Hildebrandtia and Cladostigma where the species are dioecious). The gamopetalous corolla (petals are fused into a tube or funnel-shape) has five thick bands in the middle of each petal which help the corolla to coil on itself when fading. The bands are sometimes more colourful or pubescent abaxially like in Iseia luxuriens. White, violet and pink corollas are the most frequent; yellow (in Merremia, Operculina but also Ipomoea, Convolvulus and Calystegia), blue (common in Evolvulus and Jacquemontia) and red (flowers pollinated by nectarivorous birds) do also occur. The yellow flowers regardless of the genus, open at midday and close at night, the red, pink or white flowers open in the morning to close around noon.

Gynoecium: The ovary consists mostly of two fused carpels with a single ovule in each locule. Dichondra with its two free carpels and Ipomoea sect. Pharbitis with its three locular ovaries are some exceptions. The partition between the carpels is more or less complete. A conspicuous nectary disc can be located at the base of the ovary and it is sometimes brightly colored. The style, often simple, is very variable and can be divided into two branches or more. The stigmas are often globular but sometimes they are filiform or divided. Styles and stigmas are one of the easiest and most reliable characters to differentiate the genera of this family.

Androecium: The filaments are often unequal. In Lepistemon the filaments are inserted on a large scale, the five scales completely enclosing the ovary. The anthers and thecae in Merremia and Operculina are twisted after dehiscence ; this is a very singular character distinguishing the two genera from the rest of the family. The pollen grains are smooth or echinulate (having tiny spines), In Ipomoea they are echinulate but they are smooth in Merremia. This can be a helpful character to distinguish those two genera which are otherwise superficially similar. 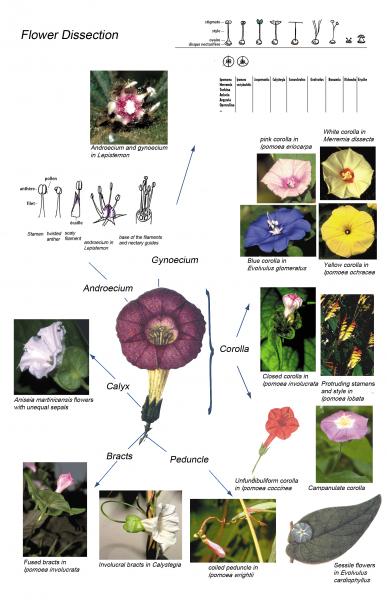 Bee pollinated flowers: They are the most common type of flowers. The corolla is generally campanulate, large and with a showy corolla centre. Nectar is produced at the base of the ovary and colorful bands on the corolla act as guides. The color varies from white, blue, yellow or purple. The flowers are diurnal and rarely fragrant. The stamens and styles are inserted on the corolla tube and often the filaments are broad and form channels at the base of the corolla leading to the nectar (common in Convolvulus, Merremia and Operculina). 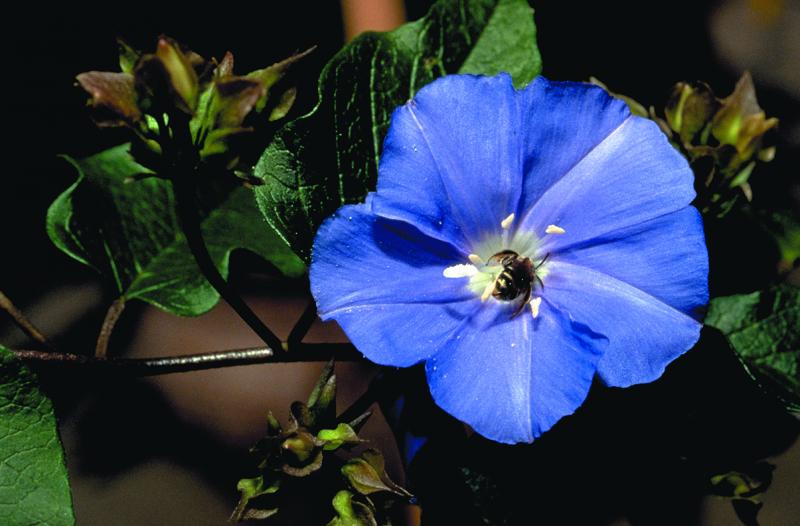 Moths pollinated flowers: They are common in Ipomoea sect. Calonyction. The funnel-shaped corolla has a long and narrow tube. The nocturnal flowers are scented, the flowers are generally white and produce a large quantity of nectar. Stamens and style often protrude from the corolla. The pollinators could be large moths with a long proboscis. 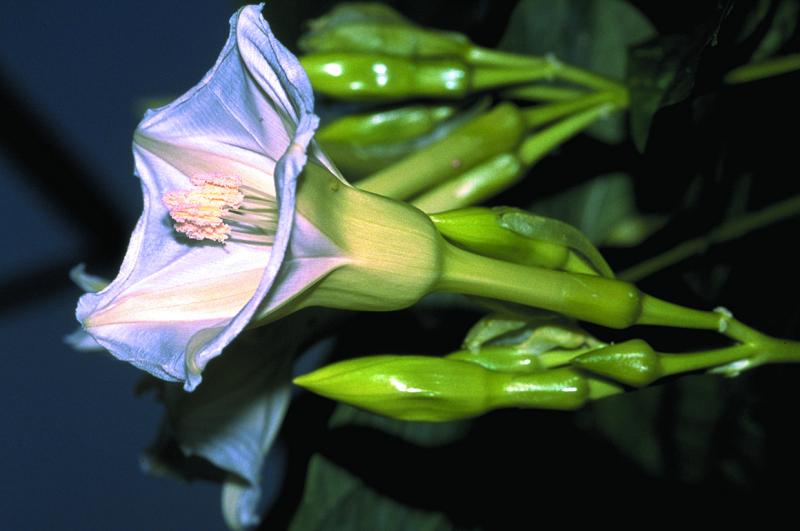 Nectar-eating bird pollinated flowers: Many species of Ipomoea sect. Quamoclit could be pollinated by birds but other species of Convolvulaceae are also known to be bird pollinated. The corolla is often scarlet red, tubular or narrowly funnel-shaped, with a long and often curved tube. Stamens and style are protruding with style and filaments pointing downwards. The flowers are diurnal and the nectar is produced in great quantities. 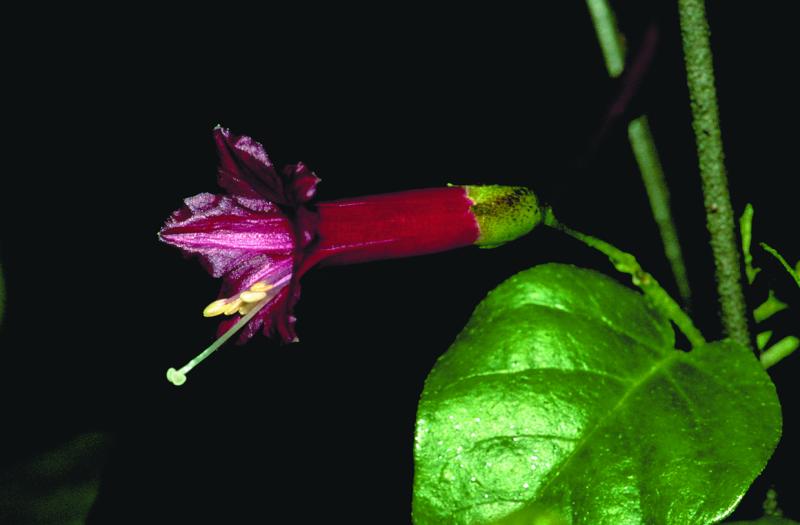 Bat pollinated flowers: An ‘ancestral’ species of Ipomoea sect. Quamoclit,  Ipomoea neei could be a candidate for bat pollination. The flowers are similar to the previous one but the corolla is brown, nocturnal and the anthers contain large quantities of pollen.

Fruits: In the majority of species the fruit is a dehiscent capsule opening with four or eight valves (but six in Ipomoea sect. Pharbitis); sometimes the dehiscence is irregular. The dehiscence is circumscissile in Operculina: the epicarp ruptures transversally and drops like a lid leaving the thin and transparent endocarp intact through which the seeds are visible; eventually the brittle endocarp shatters and the seeds drop out. In Neuropeltis and Calycobolus the fruits are winged thanks to accrescent bracts or sepals. Less often the fruit is a berry which can be animal dispersed (large woody vines of the genera Argyreia, Erycibe). In Stictocardia the sepals tightly enclose the fruit and become succulent at first, later they dry out and erode away, leaving a skeletal network of veins holding the seeds inside, like a bird cage. In Maripa and Turbina, the fruit outer layer becomes woody and the fruit is undehiscent. Nephrophyllum fruits present a rare case of geocarpy (the fruits develop and mature entirely underground). The fruits of Merremia tuberosa (the wood rose) and Argyreia nervosa (the baby wood rose) are often use in floristry. 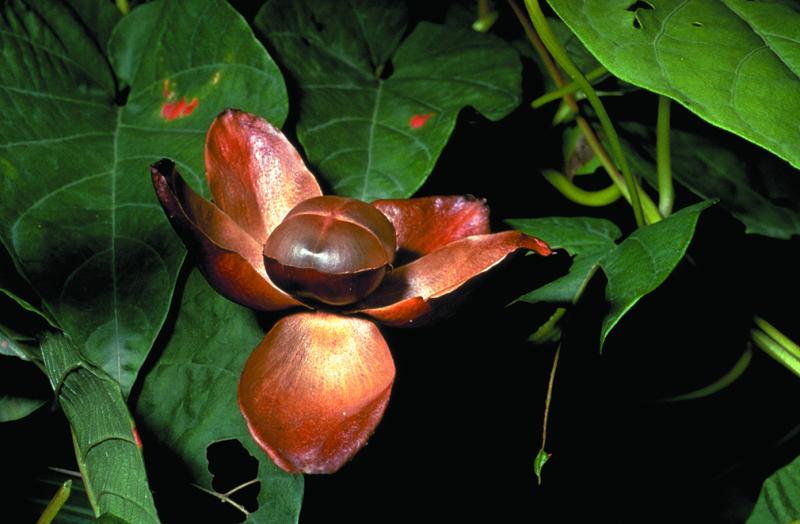 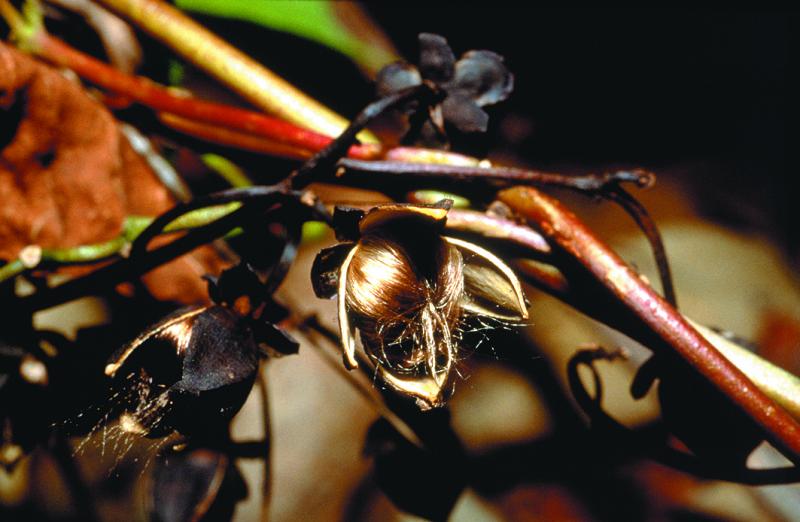 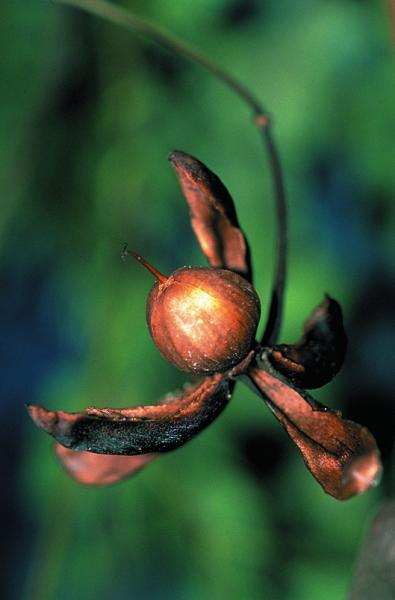 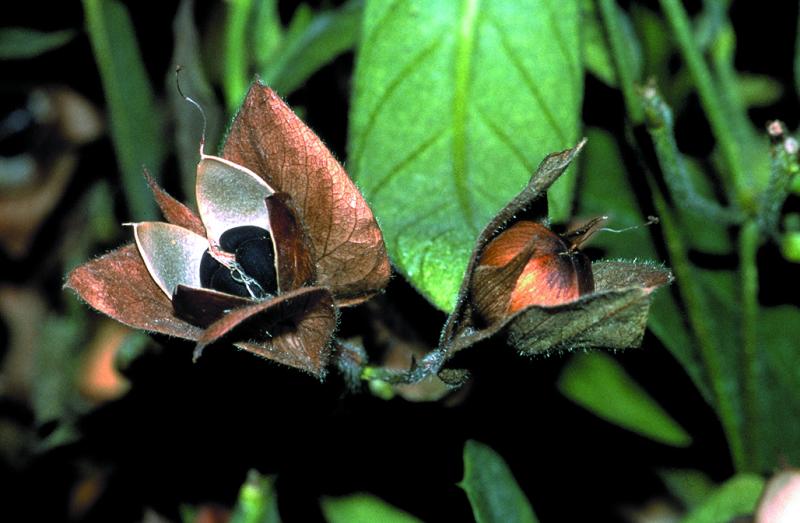 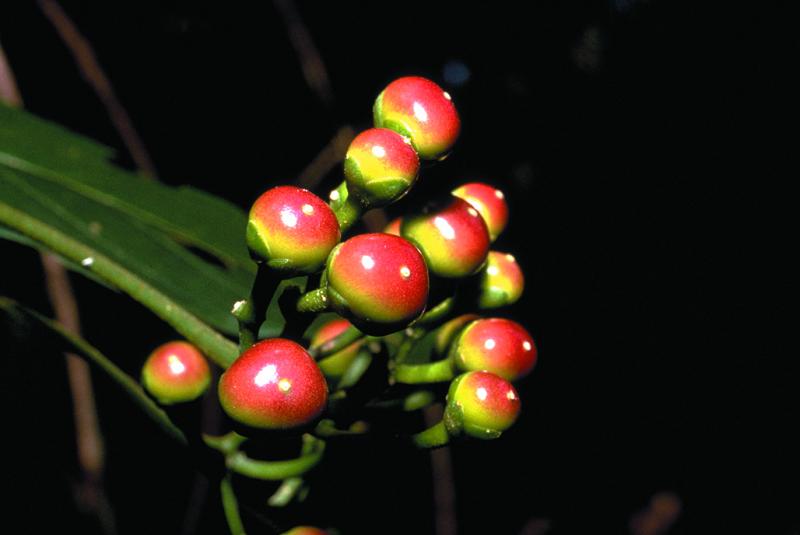 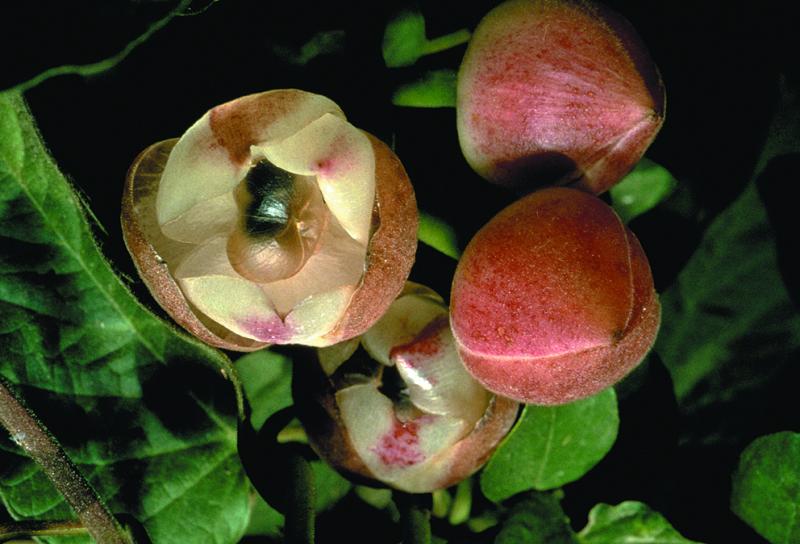 Seeds: The seeds usually number four per fruit but some can abort. They are always large and cannot be wind dispersed. Many species have seeds with large empty cells enabling them to float. Seed indumentum is very diverse and may play a role in dissemination. Germination is usually high and facilitated by scarification or soaking in lukewarm water.

The lucky seed: Merremia discoidesperma or Mary’s bean comes from a vine native to Central America and some Caribbean islands. It was called the seed of crucifixion because the seed shows a cross on one of its surface. In reality instead of freeing one seed the capsule of this species has four fused seeds. The seeds are used in Central America to attract luck and are often passed on to the next generation. The seeds are also able to float over long distances,  some seeds were found on the coasts of Norway (15000 miles) which represents the longest documented distanced travelled by a seed. 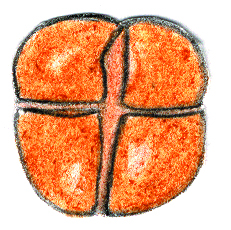 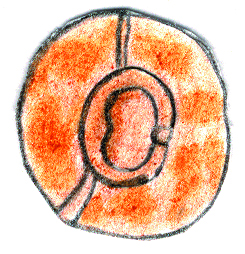 The Convolvulaceae have a cosmopolitan distribution but 90% of the species can be found in the tropics. The genus Convolvulus is present around the Mediterranean basin. Calystegia is very diverse on the West Coast of the USA with some species growing in Europe. Ipomoea and Merremia are most diverse in tropical America but they are also common in Africa and Asia. Evolvulus and Jacquemontia are primarily American. Argyreia is a little known Asian genus. In Africa we can find Ipomoea, Merremia, Turbina, Operculina but also endemic genera like Astripomoea, Hildebrandtia, Nephrophyllum. Humbertia is a very distinct monospecific genus endemic to Madagascar. In the South American tropical forest, as well as or in the African forests, we can find genera like Calycobolus, Neuropeltis, Erycibe and Maripa. This family contains many adventive species and the distribution is linked to human dispersal. Endemism is nevertheless quite high with, for example, Stictocardia inopinata the only Convolvulaceae endemic to New Caledonia. 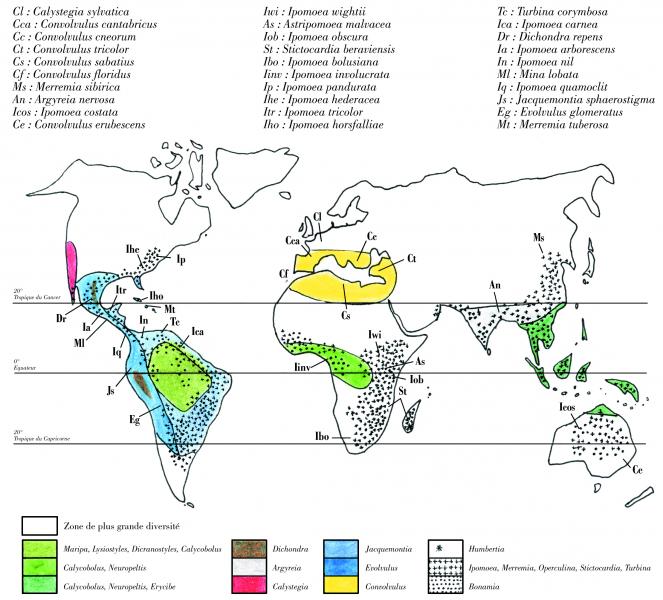 Caption: Distribution of the main genera in Convolvulaceae

Tropical rainforest: All along the equator the Convolvulaceae can be found in the form of large woody vines reaching the forest canopy. Amongst the principal genera are Maripa, Dicranostyles and Lysiostyles in the Americas;  Neuropeltis in Africa and Asia; and Argyreia in Asia. Calycobolus is present in tropical forests of both the Americas and west-central Africa; it is the only genus known to have such an amphi-Atlantic distribution. 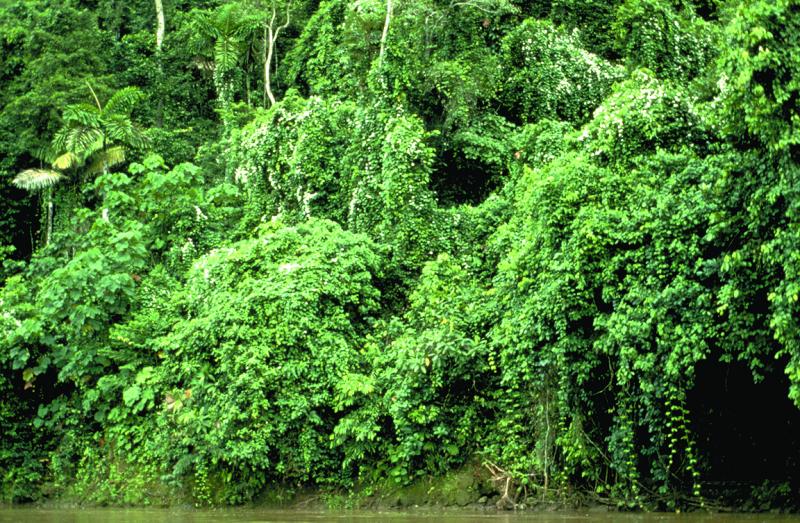 Tropical forest margins: Along rivers, roads and clearings the Convolvulaceae can form curtains isolating the rest of the forest.  Convolvulaceae as well as Cucurbitaceae and Vitaceae are amongst the families that play an important role in closing and restoring the scars left in the forest.

Savanas: Savanas are characterised by a dry season and consist of scattered plants of moderate heights. There is a range of variation between the rainforest and herbaceous savanas. Ipomoea and Merremia are diverse in savana habitats and often develop tuberised underground roots there. But trees are also present in Mexico (Ipomoea sect. Arborescentes) as well as species with caudiciform stem bases in South Africa. Ipomoea carnea subsp. fistulosa grows in seasonal swamps in the llanos of Venezuela. 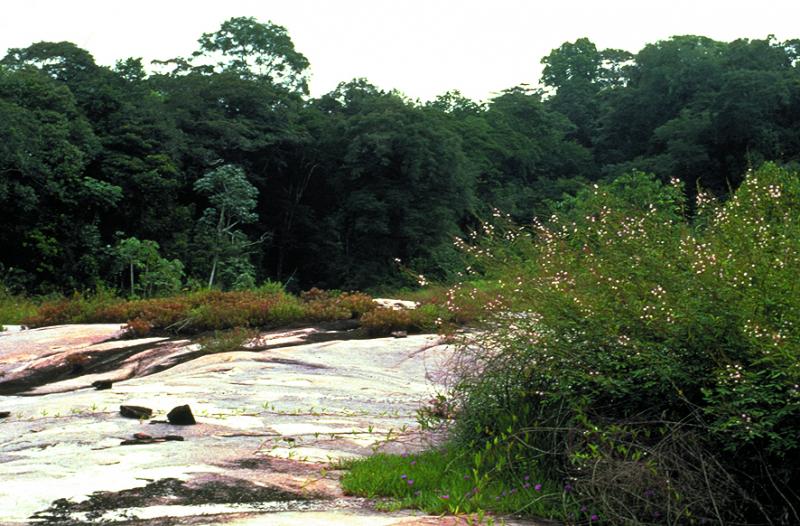 Mediteranean: ‘Maquis’ and ‘Garrigues’ in Europe, ‘Chapparal’ in California, ‘Matorral’ in Chile or ‘Bush’ in both Africa and Australia are marked by a long dry season followed by a cooler wet season. Convolvulaceae species are often herbaceous or small shrubs in such habitats. Sometimes they also form basal rosettes. Many Convolvulus species and Calystegia grow in this habitat.

Deserts: In the Sahara, Chile and Australia this habitat is marked by very little water. The species are concentrated in old river beds. They often are ephemerophytes (plants with a very reduced life cycle). 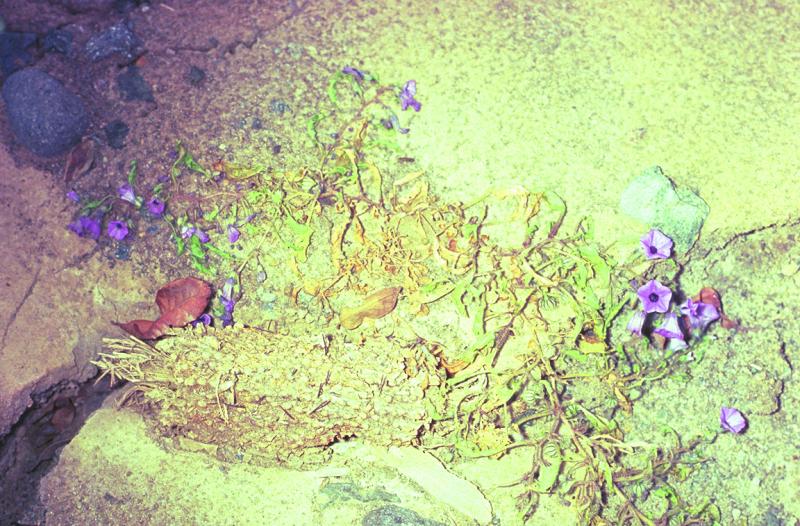 Caption: ephemerophyte in the Atacama desert of Chile

Ruderal habitats: This artificial habitat caused by human activities is quickly becoming one of the main habitats for plants in the world. Species are often annual, very prolific, with rhizomes or stolons that allow rapid vegetative spread. Many species like Convolvulus arvensis, Calystegia in Europe or Merremia tuberosa, Ipomoea nil or Evolvulus nummularius in tropical areas could enter this category. 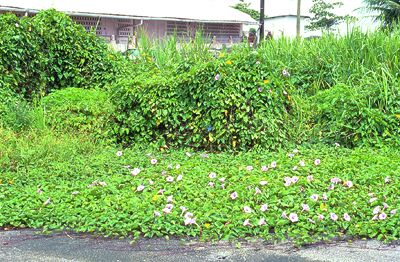 Caption: Ipomoea setifera on a roadside

Dunes and salt marshes: Sea coasts are exposed to wind and sea water spray but they are also extremely deficient in fresh water. Many species are more specialised and have long stolons or succulent leaves like Ipomoea pes-caprae and Calystegia soldanella. Saltmarshes is a good habitat to find species of the genus Cressa. 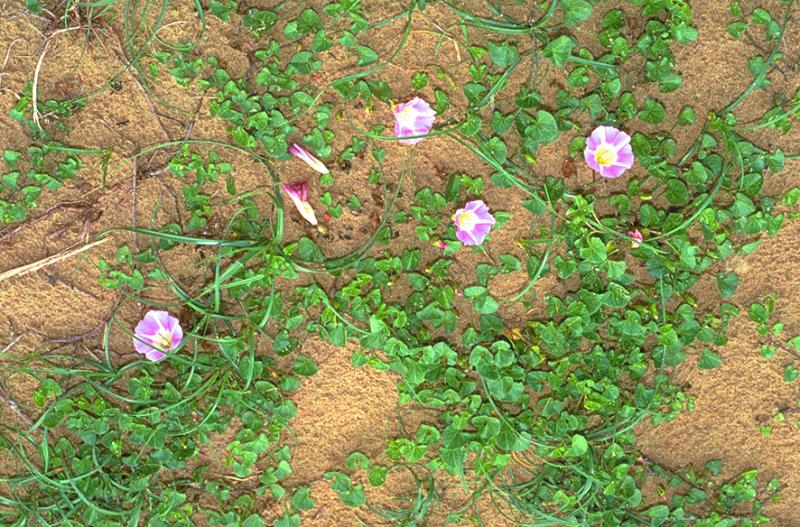 Swamps: Two types of plants could grow in water, one that roots at the bottom of the water and one that floats. Convolvulaceae has both types: Ipomoea aquatica has floating stems whereas Ipomoea sagittata and Aniseia martinicensis prefer to climb on marginal plants. 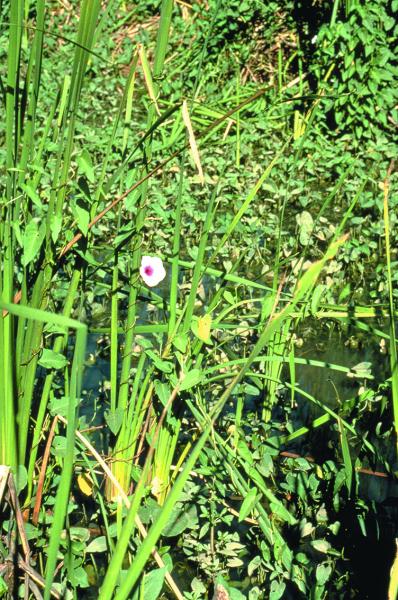 Riverbeds: rheophytic plants, which grow in tropical riverbeds that are exposed to seasonal flooding, are not very common and quite unusual in Convolvulaceae. Erycibe stenophylla from Indonesia is able to withstand such a challenging environment in which rushing torrents of water expose the plant to great physical stress as well as waterlogged substrates.