Many species from the genera Convolvulus and Evolvulus are small shrubs, they are rare in other genera.  The shrub habit is mostly found in species from Mediterranean areas and savannas. Limiting factors like drought, wind and heat give an advantage to the shrub habit rather than to the twining herbaceous one.

Botany:
Broom-like shrubs: These species grow in dry areas like cliffs. Their thin stems are not very woody and often they are photosynthetic. The leaves are small and deciduous, limiting evaporation. This morphology is the same as the one developed by the European broom (Cytisus scoparius). It occurs in Convolulus scoparius, an endemic species of the Canary Islands. The stems are thin and green, the leaves are linear and deciduous. The flowers appear at the end of the stems. In the greenhouse, the leaves of Convolvulus scoparius stay a long time on the stem before dropping but they fall at a very early stage in a dry environment.

Merremia aturensis is a species from the savannas of Mexico and Brazil. Its habit can be qualified as ‘junciform’ (like a Juncus species); the leaves are not deciduous, but reduced to scales. The plant is highly branched at the base and the stems photosynthetic. The large flowers appear at the top of the stems in the axils of the scales or cataphylls.

Thorny shrub: Spines and thorns are rare in the Convolvulaceae family and occur mainly in species of the genus Convolvulus. These species are mainly shrubs growing in the deserts of North Africa, the Middle East and Central Asia.
Thorns could be a response to stress from herbivores or extremely arid environments where stems tend to become woodier. These shrubs also grow with many other thorny plants belonging to other families. Most thorns in Convolvulus are modified peduncles but sometimes they are formed at the apex of old branches. 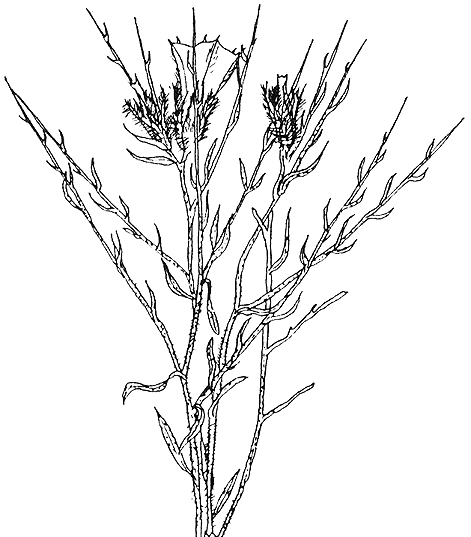 There is also a species of Ipomoea with thorns, which seems to be the only case outside of Convolvulus. This species is Ipomoea donaldsonii, a shrub 1 to 2 meters tall from Acacia and Commiphora savannas of Ethiopia to Tanzania. Along its stems are numerous short branches. These short branches are brown and purple with small kidney-shaped leaves; they become prickly or at least acute at their apex.

Upright shrubs from seasonal wetlands in savannas: Ipomoea carnea subsp fistulosa is a shrub 2-3 metres tall growing in seasonally flooded wetlands of tropical America. It can form a continuous band of several meters wide around swamps. The aerial stems collapse after fruiting and become submerged during the rainy season. They then become covered in dense adventitious roots all along the flooded part. During the next dry season, new stems can then appear along the rooted parts. These upright stems bear an inflorescence in the axils of each leaf. The capsules ripen during the dry season and the seeds are released and probably float on the surface of the water. This species is often part of a plant community of several hundred square meters, and forms a protected habitat where many birds breed. It is therefore a key species in the ecosystem of the Llanos in Venezuella.

Large shrubs: these shrubs often exceed two meters. They are more or less branched and occur mainly in savannas. Their stems are much thicker than those of small shrubs but they not become as woody. Also their architecture is very basic and the branching is not very organised so they never form neat shrubs.
Convolvulus floridus, a species endemic to the Canary Islands is the only large shrub in the genus Convolvulus. The genus Astripomoea also contains subshrub up to two meters high in the African savannas. This species is not strictly perennial and its lifetime is limited. Ipomoea hildebrandtii growing in the same environment is a large shrub exceeding two meters in height. 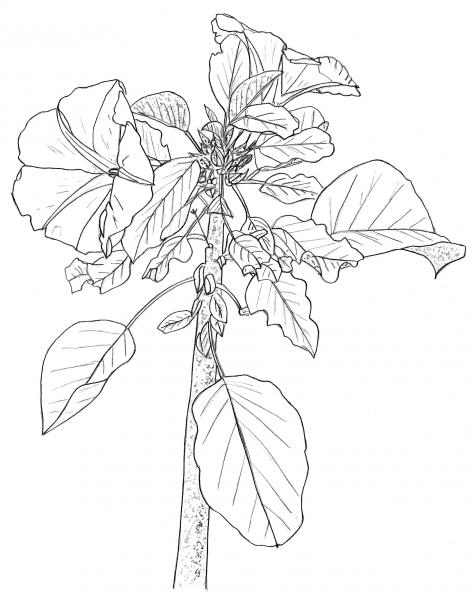 Trees: Ipomoea sect arborescentes is a section that contains trees from 5 to 15 meters tall. These trees can have a trunk up to 50 cm in diameter and containing large amount of water reserves. These species inhabit the dry deciduous forests and savannas in Mexico and are deciduous. Flowering takes place during the dry season when the trees are defoliated. It should be noted that these trees can have stems that become twining at the apex like in Ipomoea murucoides. The architecture of these species is very unusual because it mixes erect and twining branches. Trees are very uncommon in the Convolvulaceae family and largely found in savannas and dry environments; except for Humbertia madagascariensis and Erycibe stenophylla. 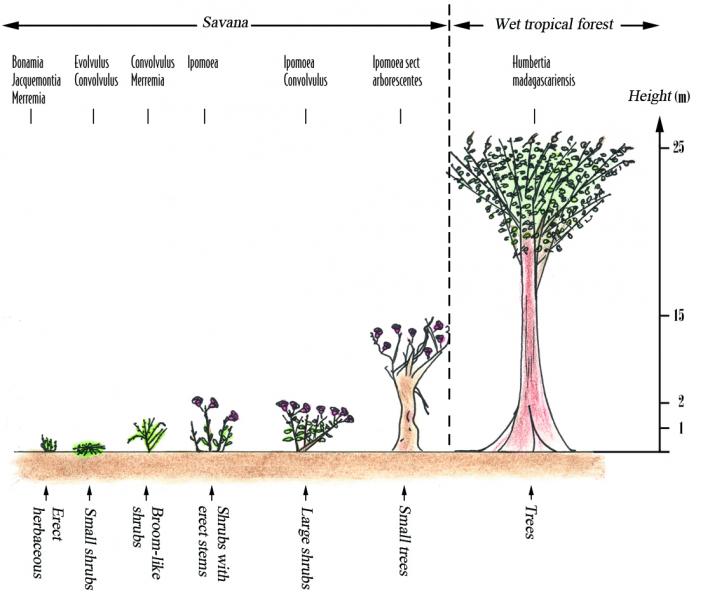 Caption: Shrub and tree habit in the Convolvulaceae.

The common cultivated taxa: Only five species seem to be grown. In temperate area Convolvulus cneorum with its silver foliage and white flowers is well known. Some botanical gardens also grow Convolvulus floridus, a large shrub from the Canary Islands. All over the tropics Ipomoea carnea is widely cultivated. Its erect stems to two or three meters bear numerous flowers varying from pink to white in colour. Evolvulus glomeratus is sometimes cultivated for its very bright blue flowers especially in the cultivars ‘Blue Daze’ (dazzling blue).

More unusual taxa: Evolvulus with its 98 species could have lots of potential species for cultivation. Evolvulus arizonicus flowers throughout the season and has a limited growth making it an ideal candidate for growing in pots or as an annual. Astripomoea is a small genus of Central Africa which can be grown as an annual in areas with hot and long summers. The species in Ipomoea sect. arborescentes require a greenhouse and are sometimes cultivated in tropical regions.

Pests: In a few species extra-floral nectaries are located on each side of the petiole, at the junction with the leaf blade. These nectaries are also common in climbing species, like in Ipomoea wightii where two pseudo-stipules are located at the base of the petiole. These slightly concave stipules enclose a nectary. The extra-floral nectaries attract ants that consume the nectar. In return, the ants could provide protection against potential plant pests, insects and herbivores. In the Convolvulaceae, these relationships are not well known; nectaries attract several species of ants and it is possible that they have a protective role by removing or destroying pests. In cultivation the Convolvulaceae are frequently attacked by many pests: whiteflies, spider mites, thrips, scale insects, aphids… 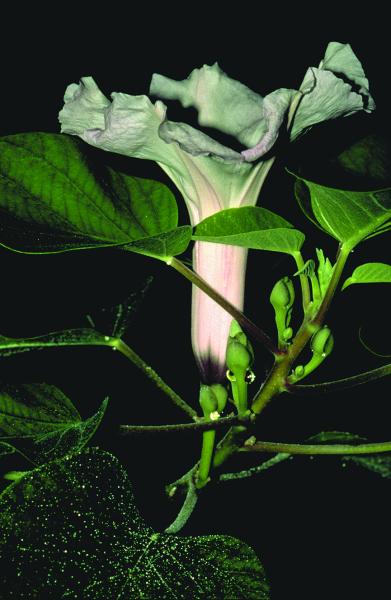 Caption: Ipomoea carnea extra-floral nectaries at the base of the leaves and calyx 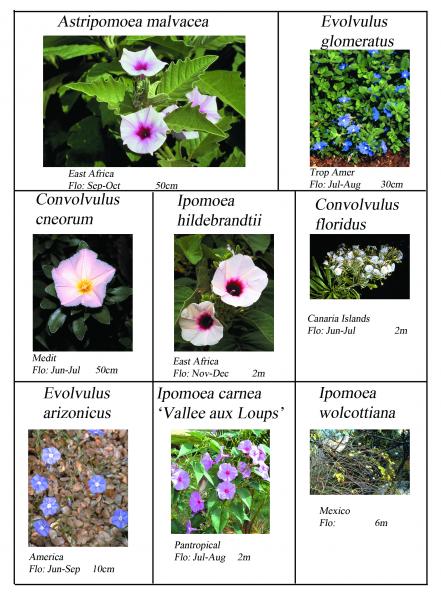