These species have lost their twining habit and develop trailing stems on the ground. They often occur in dry and open environments and are particularly diverse in the Mediterranean area in the genus Convolvulus but also in South America in the genera Jacquemontia, Ipomoea and Merremia. 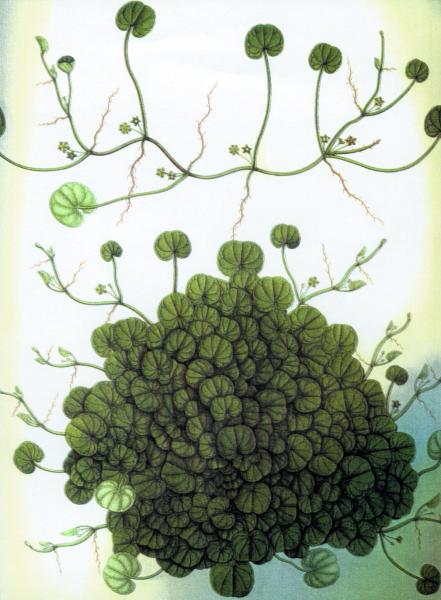 Botany:
Prostrate herbaceous: Dichondra repens is a perennial, prostrate and creeping plant with reniform leaves. It forms many branches and numerous creeping stems that root at the nodes. This species is used in some Mediterranean regions to replace turf grass which needs much more water. Most species of the tribe Dichondreae present this type of growth, forming mats, but a few Evolvulus species as well as Merremia emarginata also present the same habit. They all share some characteristics like the small flowers and the reniform leaves. These plants are very similar and they can often be misidentified.

Sand dunes herbaceous: The species of beaches and dunes are characterized by underground or above ground creeping stems. All have succulent leaves and petioles which lengthen with the gradual accumulation of sand above ground. These adaptations are due to the draining nature of the sand and the saline environment. Ipomoea pes-caprae is the equivalent of Calystegia soldanella on tropical beaches, it can have creeping stems as long as 30 meters. The leaves of Ipomoea pes-caprae, are succulent but also sensitive to the sun. The leaves are folded along the midrib when the sun is high. They then form "V" shape with the blade being perpendicular to the ground. In the shade, the leaf is flat throughout the day.

Jacquemontia reclinata is also a sand dune species that has long creeping stems. Again, the leaves are thick and succulent. The leaves are frequently placed perpendicular to the ground, thus avoiding strong sunlight as in the case of Ipomoea pes-caprae. Here it is a movement of the petiole, which allows the tilting of the leaf blade.

Herbaceous with basal rosettes: These are plants with extremely reduced internodes, thus forming a rosette of leaves at ground level. This includes species of the Mediterranean genus Convolvulus. Their natural habitat is on rocky limestone hills, ‘Garrigues’ and cultivated fields. In spring, there is a rapid lengthening of the internodes of the rosette, which then takes the form of a leafy stem 40 to 50 cm long. Flowers can appear in the axils of the upper leaves. After flowering, the stem produces fruits and dies. Suckers can appear at the base, they will form the next years’ rosettes.
This type of growth is adapted to the Mediterranean climate with hot, dry windy summers and cold winters. The apical bud, at the centre of the rosette is protected from wind, sun, cold and herbivores. 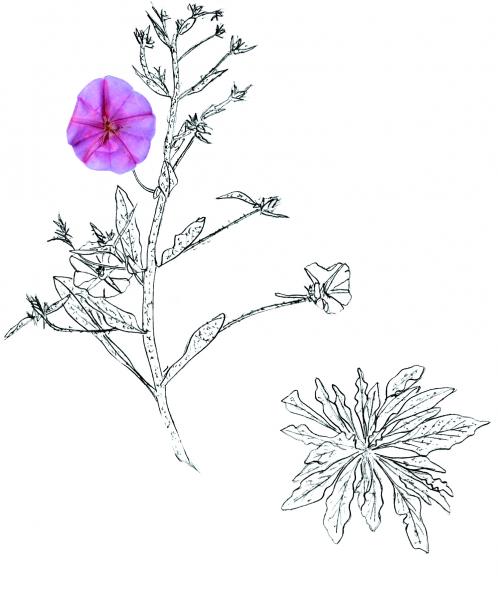 Ephemerophytes and plants with short life cycles: Merremia pinnata is creeping herbaceous with trailing stems that can be slightly twining apically. Its flowers are very small and the leaves are deeply pinnate (pinnatisect leaves), like the leaves of Ipomoea quamoclit. Its distribution is quite broad and covers much of East Africa and the South of Madagascar, it grows in dry forests, rocky slabs and roadside. Its life cycle is very short, flowering and fruiting occurring sometimes in a month 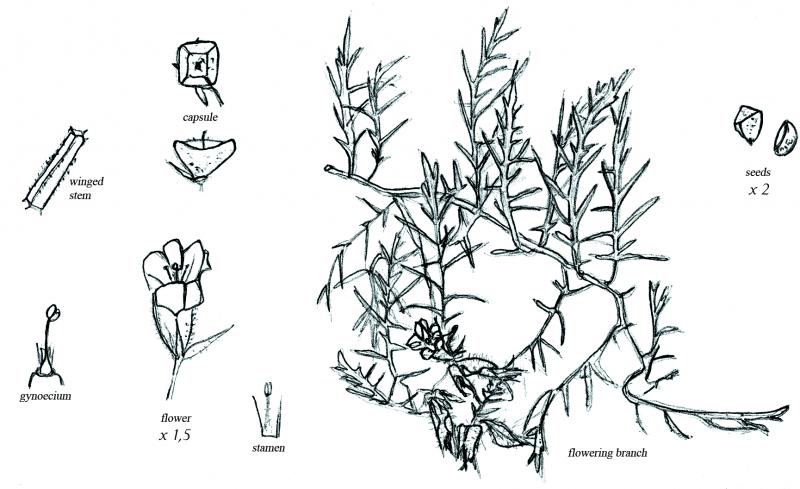 Ipomoea ternifolia var leptotoma is also a species with a very short life cycle. It is prostrate or slightly twisting apically and native to the savannas of Mexico. Its leaves are not deeply pinnate, but with five or seven deep lobes (palmatisect leaf). 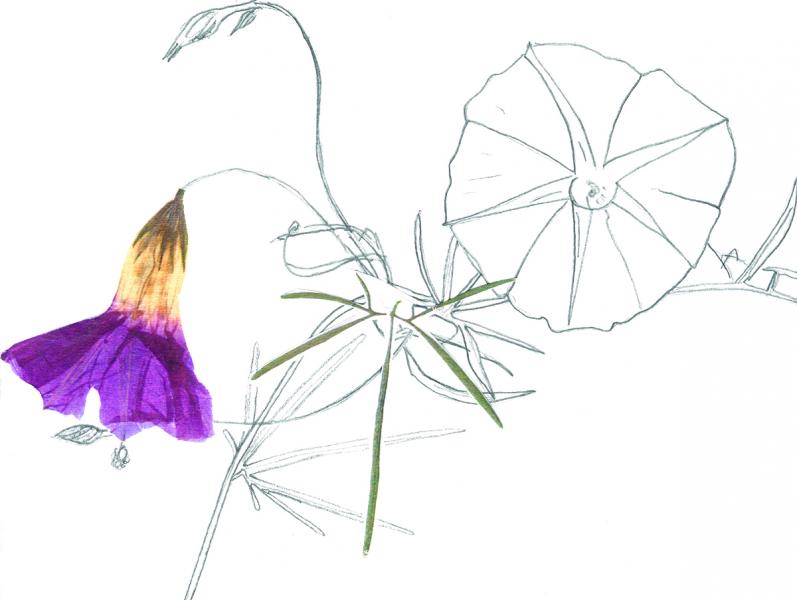 The ephemerophytes are desert plants growing in sterile places that are transformed when rain finally arrives. The green carpets formed after the rains are sometimes called ‘acheb’. These species have no special adaptive morophology, but an exceptional physiological behavior, the life cycle being reduced to the extreme. Flowering can occur when just a few leaves are formed. Convolvulus fatmensis is a species growing in the Saharan wadis and where this can be observed 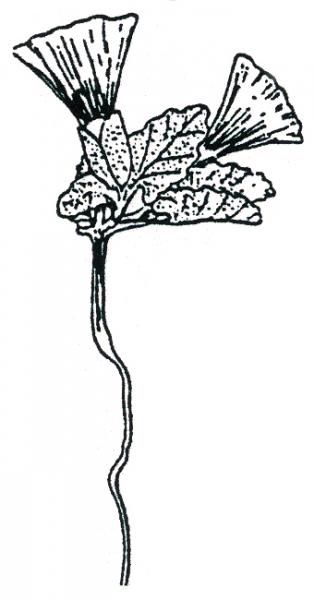 Common cultivated taxa: the most common cultivated species is Convolvulus tricolor or the dwarf morning glory often sold under  cultivars names like ‘Red Ensign’ or ‘Blue Ensign’. This species has recently been confronted to the success of a perennial species Convolvulus sabiatus (C.mauritanicus). Generous flowering and purple flowers with yellow centers make it one of the most interesting species to grow on walls, pots or in a rockery. In these rocks, Convolvulus lineatus and C.cantabricus are also sometimes grown. The two species form rosettes and require a well-drained soil and a sunny position. Close to these species but of more difficult cultivation is C. althaeoides.

Lesser known taxa: Dichondra repens is used in Mediterranean garden where it replaces turf grass in dry conditions. A new introduction which has been very successful is Dichondra argentea. It is very similar to Dichondra repens but has distinct silvery leaves. It is also quite frost hardy. Little known in Europe, Ipomoea batatas is one of the most interesting species to cover some flowering beds. It does seldom flower but its leaves are very attractive. Many cultivars with dark green, variegated, pink, leaves add a tropical touch to any flowering bed. 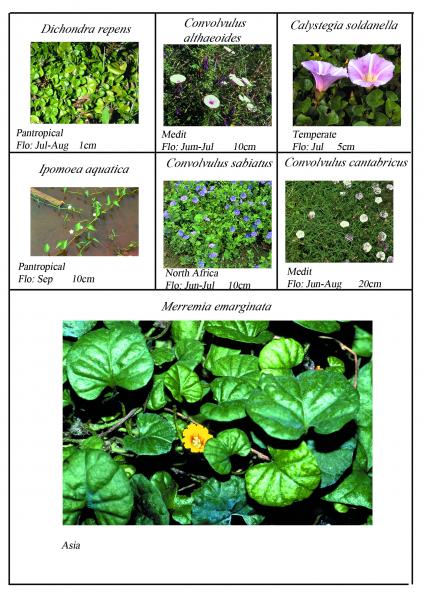