The stems of herbaceous vines do not become as woody as the previous ones, therefore they cannot reach the same heights. Their growth is more vigorous and flowering occurs early in the life of the plants. Most Convolvulaceae species are herbaceous perennial vines and they are common in open areas. The main genera where this type of growth can be found is Ipomoea, with over 700 species but this type can also be found in genera like Merremia, Jacquemontia, Operculina or Stictocardia.

Drapery: Ipomoea tiliacea is a typical forest edge species. It often reaches the tops of the trees and literally drapes all the shrubs and trees with a green curtain. The stems once arrived at the top cannot twine anymore due to lack of support, they then lose their twining function and go straight down towards the ground like a stolon. Once on the ground, they can provide support to other vines or the Ipomoea itself thus forming a veritable curtain (drapery) around the trees. 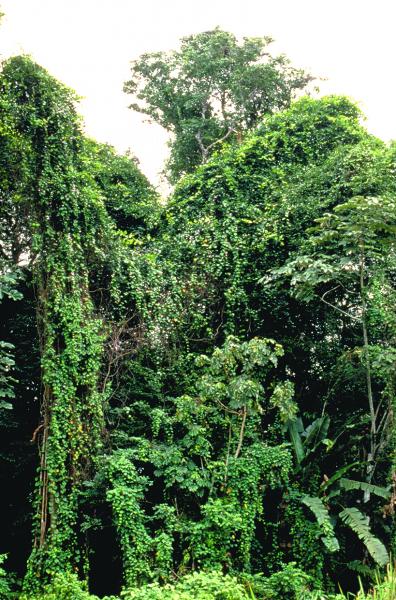 Stolons: Unlike forest species that usually produce rudimentary leaves, herbaceous vines stolons produce well developed leaves at each node. The growth of the stolons is much higher than the twining stems (up to 15.3 cm per day for Ipomoea indica) and they are partly independent, which is not the case for the forest species. If no soil is available, these rooted stolons continue to grow indefinitely and flower. They can also become long creeping stems and can cover large area.

Rhizomes: A rhizome is similar to a stolon but it develops underground, and its leaves are reduced to scales. The stems are often fleshy and accumulate reserves. At the nodes, erect stems and new lateral rhizomes can appear. Convolvulus arvensis is a herbaceous plant, with thin stems, creeping or climbing. It is very common in Europe, where it is considered a weed. It spreads easily in disturbed areas like fields, ditches, gardens, waste places. This ubiquity is partly due to the underground system developed by this species, a large rhizome almost indestructible when it is established. 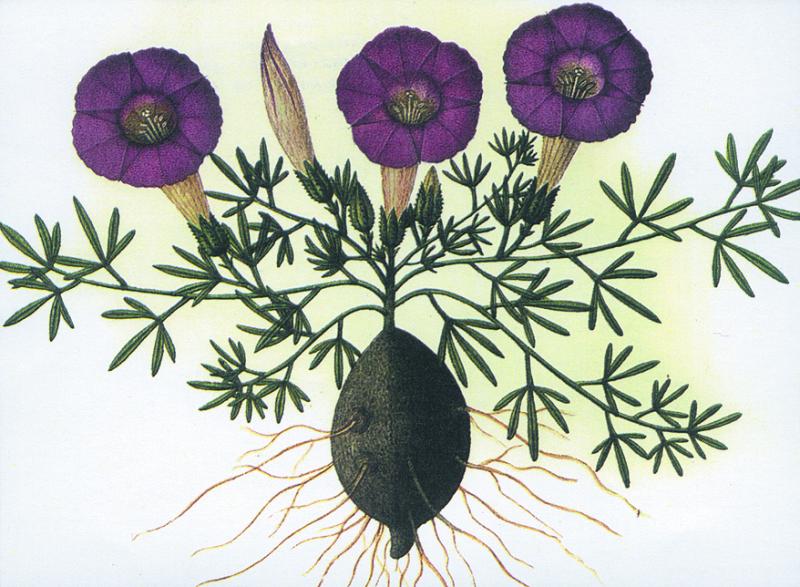 Tubers are not rare, but most often they are limited to the roots. These tubers occur in both wet and dry environments, contradicting the idea that the tuber is an adaptation to dry environments. The tuber can sometimes be more complex, with swelling and narrowing of the root, forming a string of tubers, as in the sweet potato. The tuber can also spread to the base of the stem, but the remaining aerial stems usually stays herbaceous. In extremely dry conditions, stems and roots can become a caudex (spherical tuber found at the surface of the ground) used to store water. In cold or very dry climates some species have deeply buried tubers. 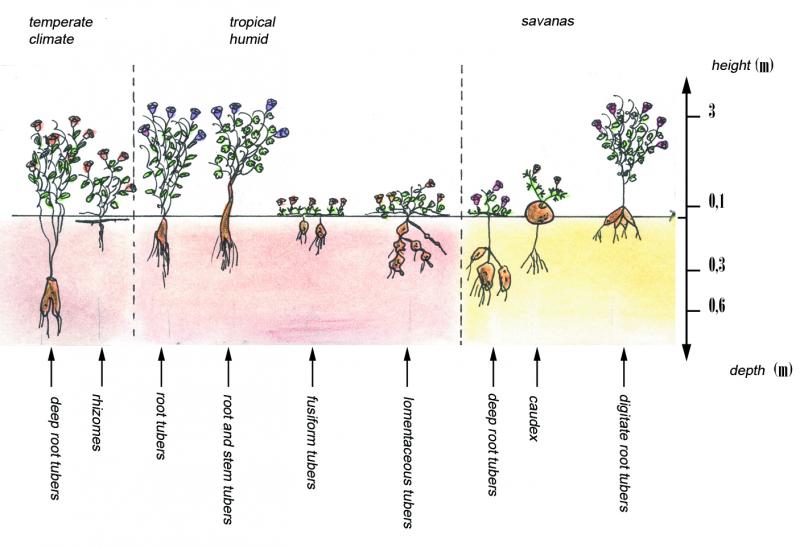 Caption: Schematic representation of the different types of tuber in Convolvulaceae

The sweet potato: Ipomoea batatas is a creeping herbaceous species growing in humid tropical environments. This species is in fact a cultigen (form selected by man for thousands of years). The original species, close to Ipomoea tiliacea is usually a non-tuberous climber. The tubers are fusiform or elongated, red or white, rarely yellowish, depending on the cultivar. These tubers are formed from the roots in contrast to the potato tubers which are formed from the stem (rhizome).

Caption: Schematic representation of the tuber of Ipomoea batatas and Solanum tuberosum

Deep tubers: Ipomoea pandurata is a North American vine extending from southern Florida and Texas to Connecticut. This species of Ipomoea reaches the northernmost latitudes and should be considered one of the rarest species of temperate climate. Deeply buried in the ground, up to a meter, is a root tuber weighing nearly seven kilograms (according to Medsger, 1924). This tuber, named "man of the earth" because of its vaguely human shape is eaten by the native Indians who call it "Mecha-Meck". At this depth the tuber is below the frost line in winter. Vegetation and flowering takes place during the summer and the aerial parts of the plant disappear for the winter. Ipomoea purga, growing at altitude in South America, also has this kind of tuber.

Cauline tubers: A tuber is called cauline when it also involves the stem that gradually thickens. This is the case of Ipomoea mauritiana a widely cultivated species in the tropics and Ipomoea albivenia native to South Africa. 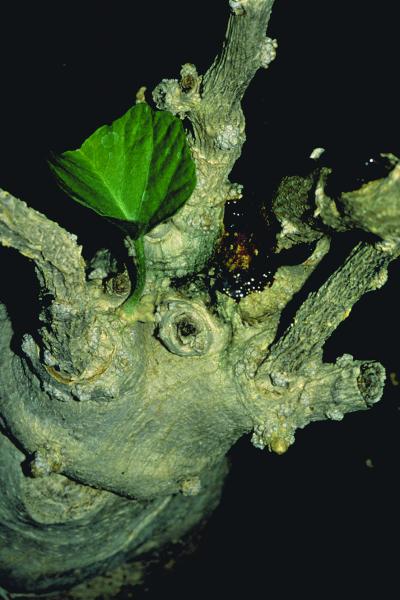 Caudex: This is the one of the most elaborate kind of tuber indicating an adaptation to extreme environment. A caudex is a large spherical tuber that arise from the soil surface and that contains large amount of water reserves. Ipomoea bolusiana is an example of a species with caudex, it is native of South Africa and Madagascar savanas.

Aquatic species: these are species from the wetlands, permanently or only flooded during the rainy season.
The species include Ipomoea sagitatta. This is a species from the Atlantic coasts of North America and South America with a remarkable geographic disjunction as it occurs naturally on the Mediterranean coast of southern Europe. It develops climbing annual stems from a branched rhizome located 10 or 15 cm below the surface of the water. This vine grows well in countries with marked seasons. Resting during the winter, it emerges in spring to flower in summer. 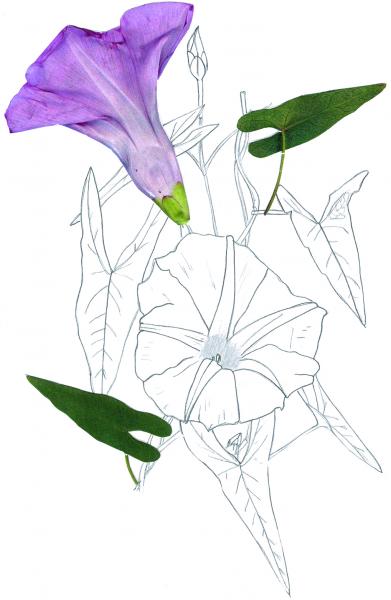 Ipomoea aquatica is a pantropical invasive species. Its stems are floating thick, hollow and they root at the nodes. When climbing, the stems are much thinner and solid. These floating stems are a unique case in the Convolvulaceae family. This species can form floating rafts to a meter deep that can extend to the banks of the lake.

This is the category where the number of species that can be used in horticulture is the most abundant. They tend to acclimatize more easily than the woody vines. Few species are annual, but perennial species can be treated as annuals in areas with hot and humid summers, because their growth is fast. In regions with short summers, planting can be done indoors to protect them and then put outside as late as possible. Unfortunately flowering often then occurs in September when the temperature decreases.

Common species: The best known and most used species are often referred as Morning Glories. Under this name we differentiate several annual species: Ipomoea nil of tropical origin and with many Japanese cultivars, Ipomoea tricolor from Mexico, with its varieties ‘Flying Saucer’, ‘Heavenily Blue’ or ‘Pearly Gate’, Ipomoea purpurea originating from more temperate areas and finally a very similar species Ipomoea hederacea.

Ipomoea indica is a perennial species that can be seen in cultivation in the mediterranean region (where it is known under the name I.learii). It has several cultivars with more or less blue flowers, sometimes white or with corolla lobes more or less divided. This species is striking because of the abundance of flowers and the alternation of deep blue color in the morning turning purple in the afternoon. Night-flowering species are less known like Ipomoea alba, sometimes called the flower of the moon. It has the largest flower in all of the Convolvulaceae and is also very fragrant, however it requires a lot of heat to develop. Nectarivorous bird pollinated species with scarlet red flowers are sometimes grown like Ipomoea quamoclit. Its leaves are finely cut and very discreet, Ipomoea coccinea is a less known species with entire leaves and the hybrid Ipomoea x sloteri has intermediate foliage. Ipomoea lobata (Mina lobata) is a species that we do not often associate with the genus Ipomoea though they are now synonyms. The zygomorphic flowers are quite unusual in this genus. It is often grown like teepees.

Unusual species: Gardeners from the tropics often use Ipomoea horsfalliae or the cardinal creeper. Its winter flowering is spectacular with long scarlet red flowers, but its propagation is difficult. Merremia dissecta and Merremia tuberosa hesitate between the status of ornamental or weedy as well as our native bindweed Calystegia sylvatica.
Finally some tuberous species like Ipomoea mauritiana and I. platensis are sometimes offered by horticulturists. The species with yellow flowers as well as the blue-flowered species of the genus Jacquemontia are not grown. The few species originating from colder regions such as Ipomoea purga and Ipomoea pandurata are no longer cultivated. Ipomoea agittata could be part of an interesting trial for hardiness.